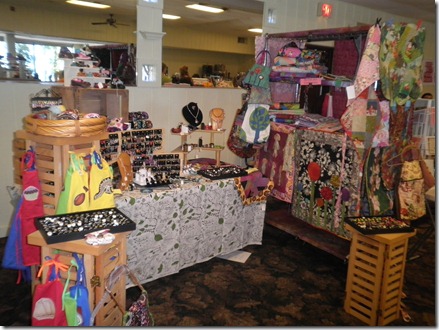 I have been doing craft sales for the past few years and they’ve been exciting, fun, and sort of profitable.  In fact, when I was in 6th grade I told my mom that I wanted to be a street vendor when I grew up (I know…I aimed high).  In vending at craft sales, I was accomplishing my dream.  In 2009, I heard about the Craftacular’s in Madison and was lucky enough to be accepted.  I had no idea what to expect – and even if I had there’s no way I would have guessed it would be what it was.  I was so busy from when the doors opened to when they closed that I didn’t have a chance to eat or pee (I’m going to have to have someone step in for me for the peeing thing this year as a baby kicking on my bladder will not allow me to hold it for 8 hours…)  The Craftacular completely blew me away – all of the other craft fairs I’d participated in, paled in comparison – mostly because there just weren’t the crowds of interested shoppers like the Craftacular had. After the 2009 Holiday Craftacular I was lucky enough to be accepted into and participate in the Valentine Craftacular, the Spring Craftacular and the Summer Craftacular.  I continued to be blown away.  Through this time I grew to be friends with the founder, sponsor and organizer of these fabulous events – Naomi Richardson of the Glitter Workshop. Naomi has recently re-opened the Glitter Workshop as a Brick and Mortar in Madison, WI, but graciously took the time to answer a few questions I had about the amazing show she puts on. 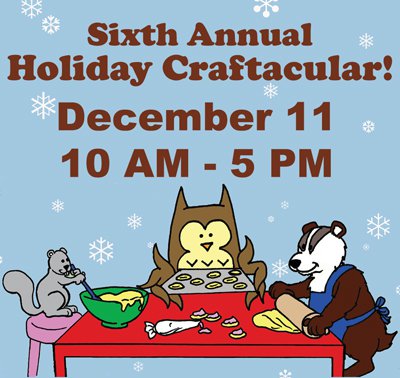 When did you have your first craftacular? June 2005 (there have been 15 Craftaculars since the first in 2005) What made you decide to organize a craft sale in the Madison Community? I had vended at shows in Chicago (Renegade) and Milwaukee (Art vs. Craft) and realized that Madison really didn’t have an ‘alternative’ craft show of its own and saw through my shop that there were so many crafty people looking for an outlet. You always have a fantastic turnout at your sales – can you share your secrets? Tons of guerrilla marketing – handbills, posters, emails, and now social networking site like Facebook and Twitter.  I think it is also really important to choose vendors that are familiar with the style of show and have high quality items so that shoppers know there will be consistently fun, well made items. What is the most difficult part of organizing a sale like this? At the beginning, finding a venue and enough people willing to take a risk at a new show.  Now, it is hard because I may get over 300 applications for a show with only 45-50 spaces.  It is hard to have to turn anyone down! What are key things you do to help maintain the reputation this sale has of being high quality, quirky and fun? I really take a long time to go over the applications and make sure there is a diverse, fun selection of items for sale.  I also reserve a few spaces for new artists at each show so that it isn’t always the exact same vendors. Anything else you’d like to share? Thanks for taking your time!  I hope to continue the shows for years to come and it I am thrilled to be in a city where I am so surrounded by amazing people. If you’re in the Madison Area or want to journey to a fabulous show the 2010 Sixth Annual Holiday Craftacular will be December 11th, 2010 from 10am to 5pm at The East Side Club on Monona Drive Over 40 amazing artists will be vending their goods on the day of the sale – don’t miss it!