Columbia County, WI is planning on setting up a ‘Barn Quilt Trail.’  I am planning on applying and crossing my fingers and toes that my orchard will get accepted.  Never heard of a barn quilt?  Well, they are quilt squares that are painted on a plywood (typically 8’x 8’) and then hung on the barns or other farm buildings.  Once the blocks are up, a map of the county will be made so it will be a ‘tourist destination’ to stop and/or drive by and see all the beautiful pieces of art hanging in our farming community. The objectives of the Barn Quilts of Columbia County (I’ll add the mission statement later – I never wrote down the final one) are:

Here are just a few pictures from the Barn Quilts that currently are on display in Green County, WI (other counties in Wisconsin also participate – Green County just happened to come up first on my google search).  To read more about the stories behind the barns check out:  http://www.greencountybarnquilts.com/inner.iml?mdl=locations.mdl 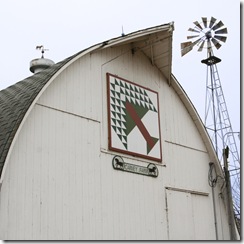 Quilt Pattern:  Tree of Life Nancy Carney
W341 Halfway Tree Rd.
Brodhead, WI 53520 History
This barn was built in the 1950’s and purchased by Larry and Nancy Carney in 1969. It was built in the early 1950s as a dairy barn. Today the barn houses 8 horse stalls. On the opposite end of the barn is another quilt (listed under Bellamy) – which is visible from Hwy. 81. Comments
The "Halfway Tree" is on the property and has many visitors each month! To native Americans, the large bur oak on the farm located on old Highway 81 just past the Brodhead airport in Green County marked a point halfway between Lake Michigan and the Mississippi River. In the 1800s, every spring, according to the old-timers, the Indians, possibly Oneidas, passed north along the Sugar River. They usually divided their party, some ascending the river in canoes, others riding horseback or walking along the bank. The Half-Way Tree naturally was a favorite camping spot for the Native Americans and became one for early white settlers as well. According to present-day experts, the tree is off by about six miles, but there is disagreement about the methods of measurement. At any rate, the old tree still stands, protected through the years by various owners, and still marks the half-way point, or close enough to it, along the ancient Indian trail. 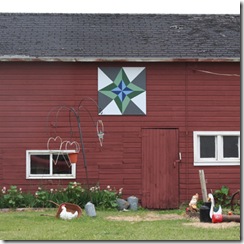 Quilt Pattern:  North Star Don and Margaret Huseman
N3588 Race Rd.
Brodhead, WI 53520 History
The farm has been in the Huseman family since about 1964. Years ago there was a tavern on the property. This was a 50th anniversary gift to the Huseman’s from their children. 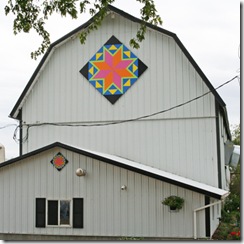 Quilt Pattern:  Indian Tile Alan and Yvonne DeVoe
N266 Twin Grove Rd.
Monroe, WI 53566 History
The farm was purchased by Robert and Norma DeVoe in 1985, and by Alan and Yvonne in 1999. It is a working dairy barn – 30 stanchions were added in 1999, and a double 8 parallel parlor was installed in 2005. Comments
Note the matching small quilt on the front of the milk house. Yvonne chose the colors and the pattern because she wanted something bright. Visitors are welcome; please call ahead to make arrangements – 608.325.2150. 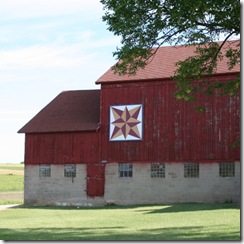 Quilt Pattern:  Star Shadow Pat and Arlinda Faessler
N1247 County Road G
Juda, WI 53550 History
This barn was built in 1868. The original function was a dairy barn, and continued as a dairy barn until 2001. It now is used for hay storage. The building was constructed with hand hewn beams, sided with 12 inch boards. The original dimension of the barn was 34′ x 64. Currently it is 34′ x 80′. Originally the barn had cross alleys, and housed 40 milk cows and horses in the lower level. The upper level was a hay and grain mow. The Faessler family purchased this property at a Green County Sheriff’s sale in 1941 by August Faessler. Today two of August and Ida’s children and their family, own this farm. Comments
The barn is located in the Town of Spring Grove, John A Brandt received title from the United States Government on November 6, 1845. The family chose the Star Shadow pattern because it was popular in the era (1860-1890) that the barn was built. 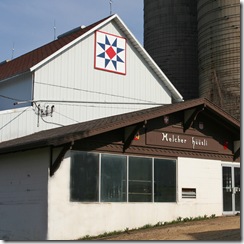 Comments
This barn quilt was raised April 19,2008. Approximately one month later, hundreds of people saw it when the Schwarzenberger Family hosted the Green County Breakfast on the Farm. 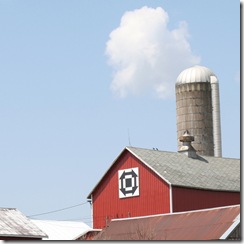 Quilt Pattern:  Dove at my Door David & Marcia Wald
W6898 County Y
Monroe, WI 53566 History
The Wald family dairy farm was purchased in 1916 from Isaac Williams by David Wald’s grandfather, Karl Wald. David’s parents then purchased it in 1959 upon the settlement of his grandmother’s estate. Currently, David and Marcia Wald farm & milk their dairy herd on the family farm, Rocky Rolling Acres, which they purchased in 1979.  At one time, this was a side barn, but it was converted to a center driveway in the early 1930’s. Comments
"We are very proud of the fact that our farm has been in the Wald family for nearly 100 years and that so many generations have worked and played here. Presently, our grandchildren are the latest to experience the various interesting activities of farm life when they come to visit. We encourage any visitors coming by to see the barn quilt to stop in, say hi, watch the milking, hay making, harvesting, and planting. We would love to meet visitors and answer any questions"
– David & Marcia Wald
This barn quilt was raised on April 19, 2008. —————————————————————————————————— Now, it’s my turn to figure out what quilt block I want to submit to the committee to be accepted for the tour.  I’m thinking I want to find something from the Bohemian heritage (my husband’s family background ) and mix it with an apple block…I’ll keep you posted with what I come up with!