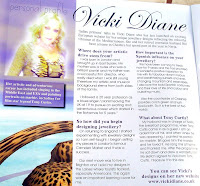 Today I’m going to introduce you to a wonderful seller on etsy, VickiDianeDesigns. VickiDiane puts together these amazingly stunning and popular treasuries that ‘exposes’ the artists’ of etsy. It’s a wonderful opportunity to see the face behind the work…like going to an online craft fair! I have worked with her on a couple of different treasuries and she has been very supportive, laid back, and helpful all at the same time. I figured it was time to introduce this wonderful artist to the rest of you! I sent Vicki my standard questions and she sent me back a wonderful story of herself, her beginnings and her inspiration. I’m proud to be the one EXPOSING VickiDiane today! My background is from an extremely artistic family. My father was a famous film director in partnership with Douglas Fairbanks Jr in the late 40’s early 50’s. I acted in a couple of his films when I was very young as he died when I was only 8 aged 42, and I later went on to drama school. He used to be very musical and paint and sculpture a lot. Mum was his nurse and was a brilliant pianist. This was in the UK. I was a professional singer and pianist for 20 years travelling all over the (hot) parts of the world: the Bahamas at 19, the States, Middle East. Then I met my husband 20 years ago and was semi *tamed* and took up portrait painting and jewelery making instead of gallavanting happily across the globe.
I am self taught and worked in the famous Camden Market in London… progressed onto large Trade Fairs and continued doing painting, but on marble, a medium I picked up and copied the idea after a trip to Spain, (a very unique idea and concept), but too blimmen heavy to carry around doing shows with! I also spent 3 years selling in a shop in the Laines in Brighton, which was full of American tourists, and a GREAT learning time for me.

I don’t do anything except sell my designs here in Southern Spain, (where I’ve been living now for nearly 12 years) and do the fashion shows in the area, making jewellery to match the models outfits, which I absolutely love. I sell to a few shops and basically sell through the internet as times are pretty tough all over and shops are opening and closing daily here.

I sometimes think I’d like to go back to playing the piano and singing the blues, but that was a while back…and I’m really quite shy you know 😮 ( REALLY Kim !! I still don’t believe her…! ) I honestly have NO idea how I heard about Etsy… sometimes I wish I never had, (not really) because it nearly rules my life, and the time difference with my Etsy friendships is always 6, 7 or 8 hours difference…(Spain is ahead) so I never get to bed until at least 2 in the mornings .
I started the Artists of Etsy Exposed Treasurys about last Spring 2008 and am on number 54 or 55 and have only another 75,800 to go to cover everyone… except Etsy keeps expanding, (and so will I if I spend so many hours on the computer ). (I used to play tennis and go to the gym every day but Etsy is quietly pushing in…. SUCH a wonderful sado masochistic addiction I love to hate !!) The EXPOSED Treasurys took off almost straight away and as soon as a Treasury is up and running now, the convos flood in for people asking to be featured. Many I never hear from again, but the people who ARE featured usually are so lovely and grateful, and I’ve had many back 2 or 3 times now, as the sales are usually in double figures and the viewing public has gone up to 3000 a few times now. If people stop looking, I shall wind down, but that I think is a long way off and I simply LOVE meeting the Teams and new artists, loads of which I’ve admired from afar. It’s magic to know who I’m talking to, as I AM such a nosy bugger!!
The only advice I can offer to new fellow Etsyians is that Treasury making is SUCH fun and promoting is the only way to get yourself known….promote, join Teams, join in Forum threads and push your shop at every oppurtunity…. the odd showcase. Just don’t give in !!
Looking through people’s shops and Treasury’s is something I truly love and I have a handful of artists that I am in awe of and am continually on the prowl for more. Beware !!!!!
I hope you enjoyed meeting VickiDiane, the woman behind the amazingly popular EXPOSED treasuries, as much as I did. I would strongly encourage you to take a few minutes and browse through her etsy shop…not only is her jewelry gorgeous and unique, but her pictures are great. Different backgrounds used in unique ways and even some models you wouldn’t expect for a piece of jewelry (a cat!).
If you aren’t sure what these ‘EXPOSED’ treasuries are that I’m referring to you could go and look in either the main treasury or treasury west and there is usually one right at the top of the list. Otherwise go to my Treasury Saturday blog articles to see some that I was featured in. I have been lucky enough to be ‘exposed’ quite a few times!
Thanks again for the interview Vicki! I hope to expose myself to you again one day!