So, I’m going to start out this post with the mishaps of the bash.  Then I’ll move on to a couple of miscellaneous pictures I took.  Unfortunately I was having a really good time and did not take as many pictures as I would have liked… Bash Mishaps NUMBER ONE:  the Unfortunate Avocado’s The 8 avocado’s I  purchased for Karma to make guacamole with would not ripen (and yes we tried putting them in a brown paper bag with a banana…no good…oh and microwaving doesn’t work either). NUMBER TWO:  The Frito vs. the Cheeto As I have mentioned in prior posts’ we had planned on including mini bags of Frito’s at 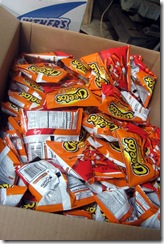 the bash so people could make walking taco’s.  After searching forever for them we finally found a source (I will not reveal it).  We ordered the “Frito’s” and they arrived on the Thursday prior to the party.  *Note to self* make sure to look at the outside of the box prior 30 minutes prior to the party on Saturday.  Not sure if anyone decided to try walking taco’s cheeto-style but they did taste extra cheesy and extra yummy on Sunday morning! NUMBER THREE:  What Can We EAT ON? I had purchased 300 plates prior to the party.  I purchased 300 of the cheapest paper plates possible.  Which means…that everyone was using at least 2 at time so the food did not seep through them.  I realized this dilemma early on and called my cousin Amie who had not arrived yet.  I requested that she bring more plates….when she asked how many…my response, “two-maybe three hundred?”  We did run out of plates for about 15 minutes but luckily Amie arrived soon after with some fabulous plates…not the cheapest kind either so we made the night!  (thanks Amie)   And that was it.  Three problems for the largest party we’ve ever thrown…I think that went rather well.

Leave a Reply to The Redhead Riter Cancel reply